This is an example of a custom designed, in this case a build for a friend. This is the model that all of our later EL84 amplifiers are based on.

This was a project for a friend with a unique requirement: The amplifier needed to have the option to connect two sets of speakers. This amplifier was conceived as an addition to his “man cave” which contained a formidable collection of speakers acquired from auctions and secondhand shops. So the need was to connect more than one pair and be able to switch between them.

Also required was a phono stage, since he had a large collection of vinyl and a wonderful vintage Audio-Research turntable from the late ’60s.

The amp was built on a small chassis to fit into the available space. The switch on the front is the speaker selector, the power switch is at the back.

Once again, a custom-wound power transformer was used, suffering similar aesthetic challenges to the previous project. 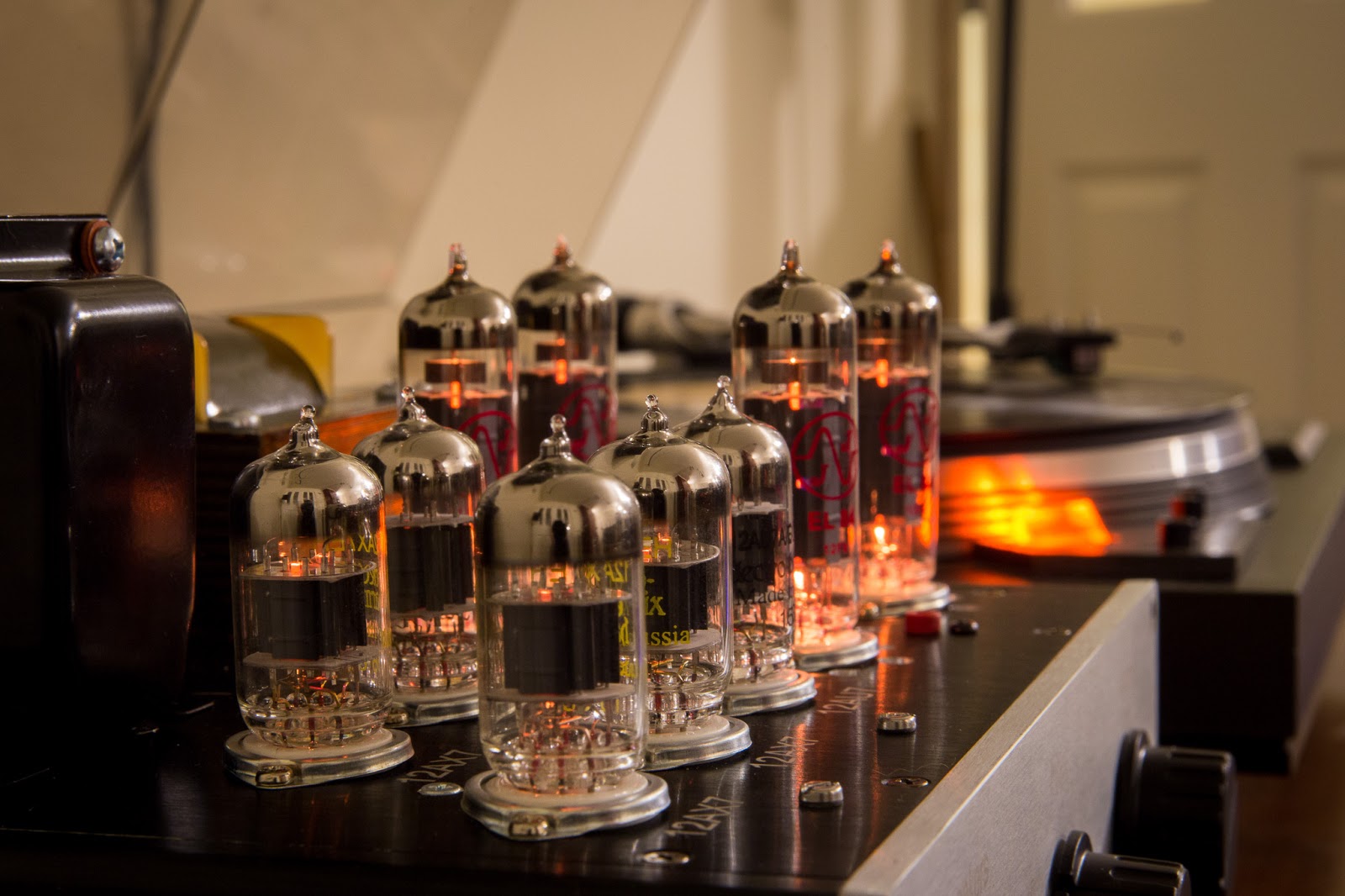 The chassis selected was about 5mm too narrow to fit the power transformer and the output transformers across the back in the usual configuration. So it had to be non-symmetrical 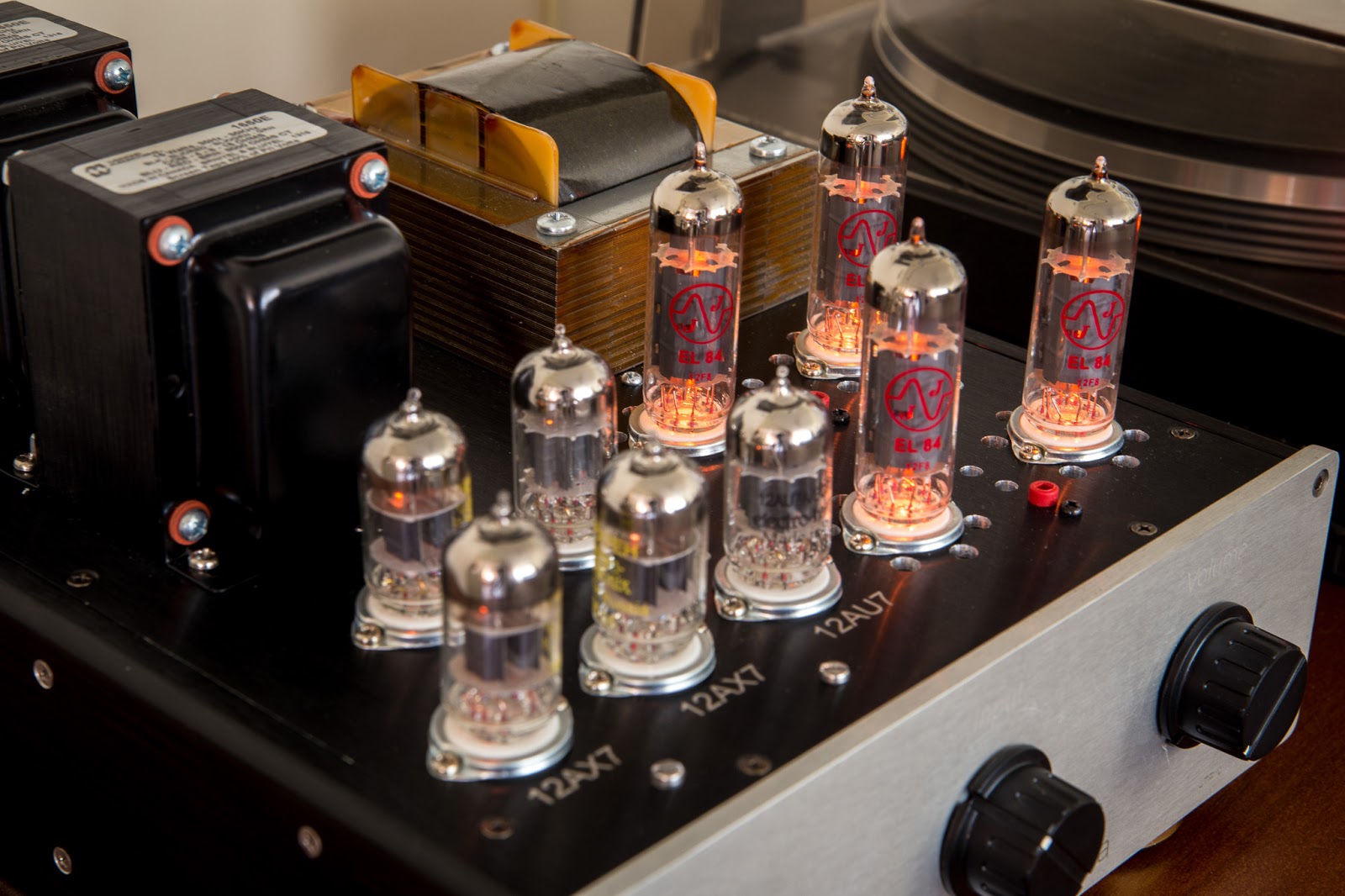 The front three small-signal valves form the RIAA Phono stage, the rear two are the line-level voltage gain and phase splitter.
The Bias test points sit between the EL84 output valves, with recessed trimmers to adjust, and test points to measure the voltage across the 10Ohm cathode shunt. 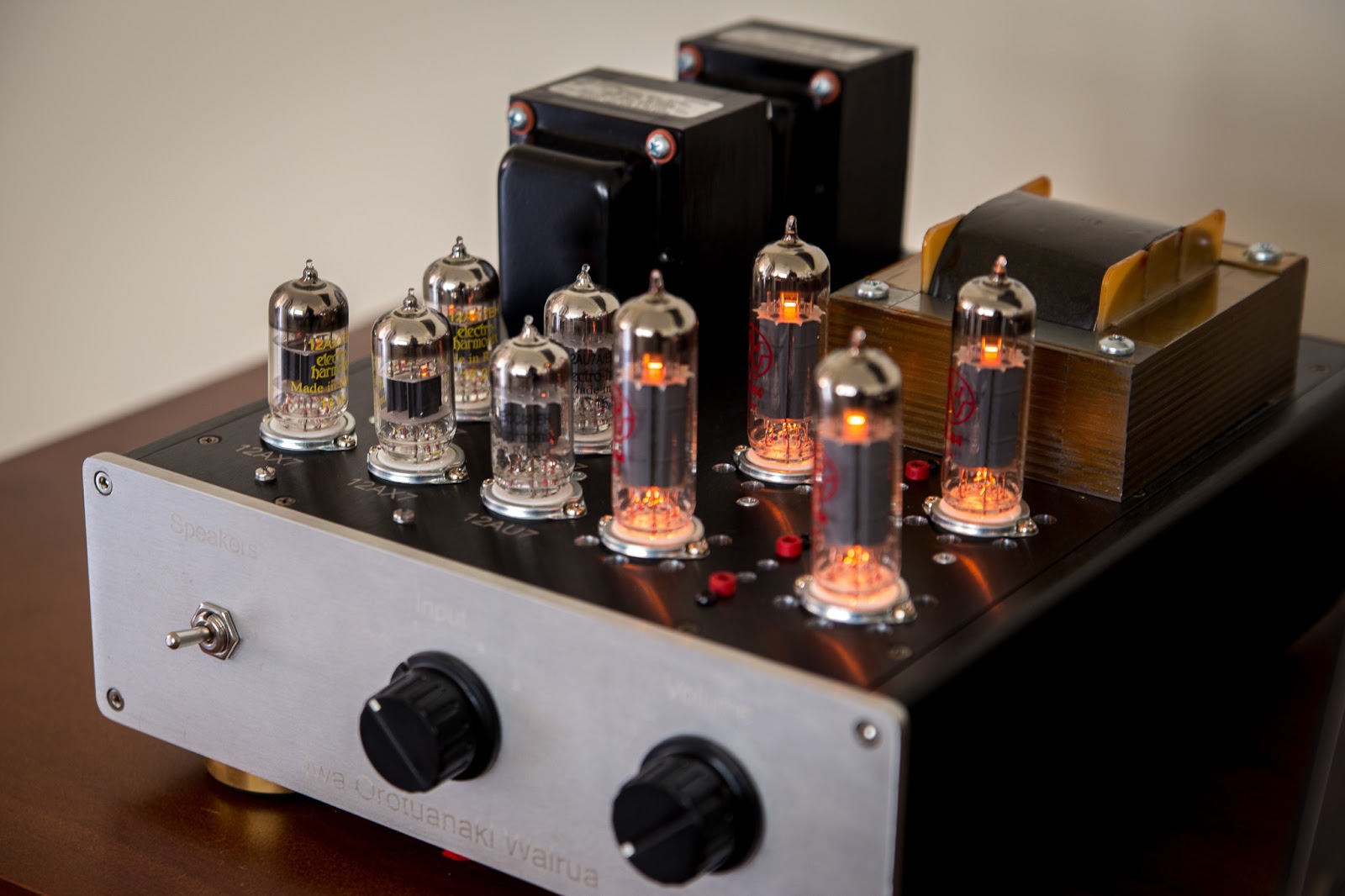 The Slovak-made JJ EL84 output valves on this one have quite a pleasing amount of light-leakage from the filaments and cathodes. Unlike the Russian Electro-Harmonix small-signal valves which are hard to see any filament glow from at all

Inside, the amp is crowded. Point to point wiring inside a tight working space.
Polyethylene Film capacitors are used for inter-stage coupling, and also in the RIAA stage, which as at top left in this photo. The power supply board sits under the output transformers, The power supply board has my usual 555 timer-based circuit to delay the B+ turn-on be 30sec giving the valves plenty of time to warm up first. By use of this circuit, combined with heater elevation for the small-signal valves, I can get away with avoiding the diode on the cathode follower in the RIAA stage, which is DC-coupled to the previous gain stage. 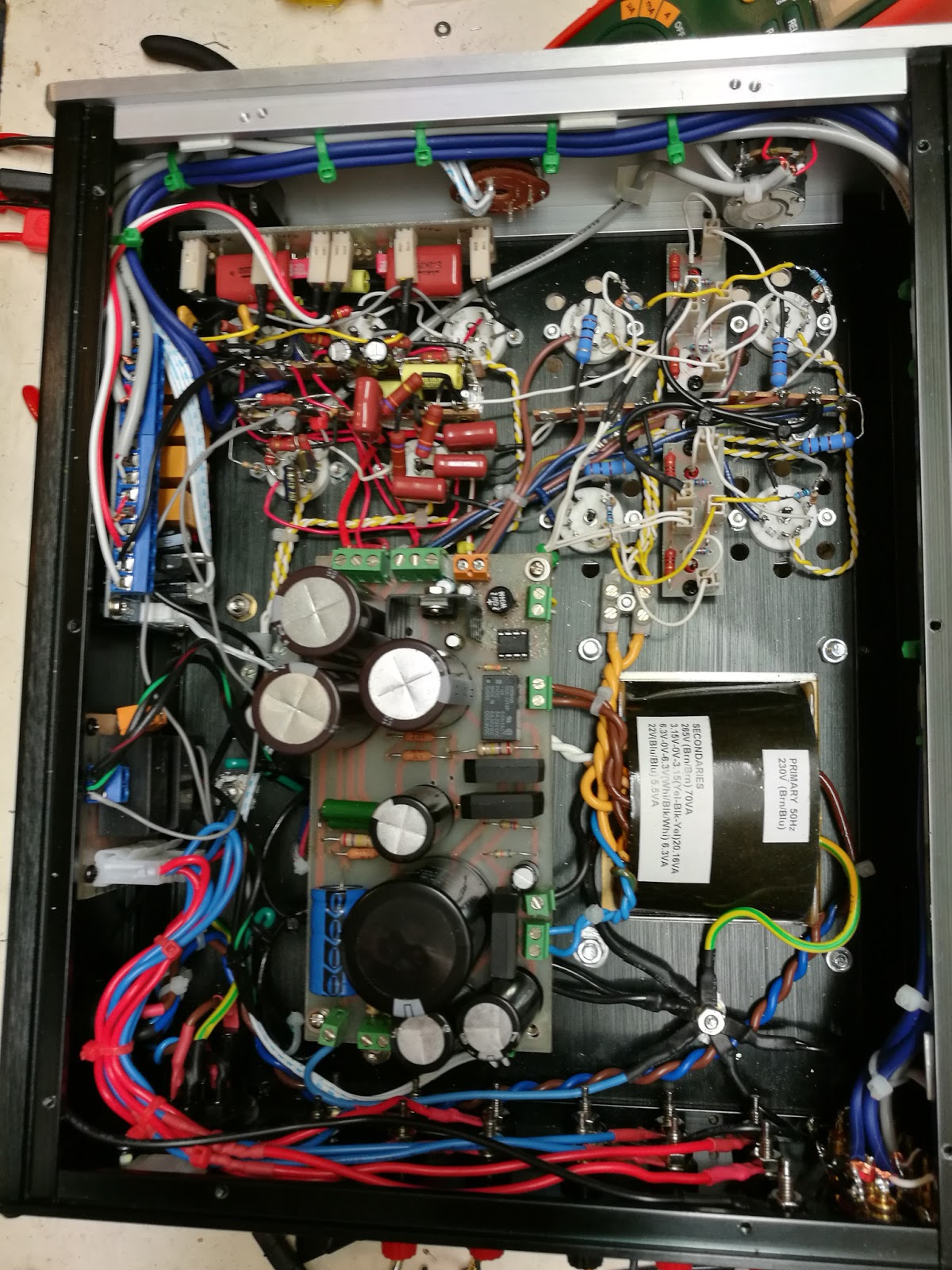 The sound from this one is clean, detailed and very pleasing. The main amp stage is based on the well-regarded Fisher X100, with the 12AX7 gain and 12AU7 phase splitter, though this design runs that 12AU7 closer to its 5mA sweet spot for linearity from a 300V B+ than the Fisher does.

The RIAA stage works well. The Cathode follower is needed to drive the volume control which represents a 50K load across the input. The noise floor is low, hum is non-existent, and distortion does not occur even on the loudest passages. 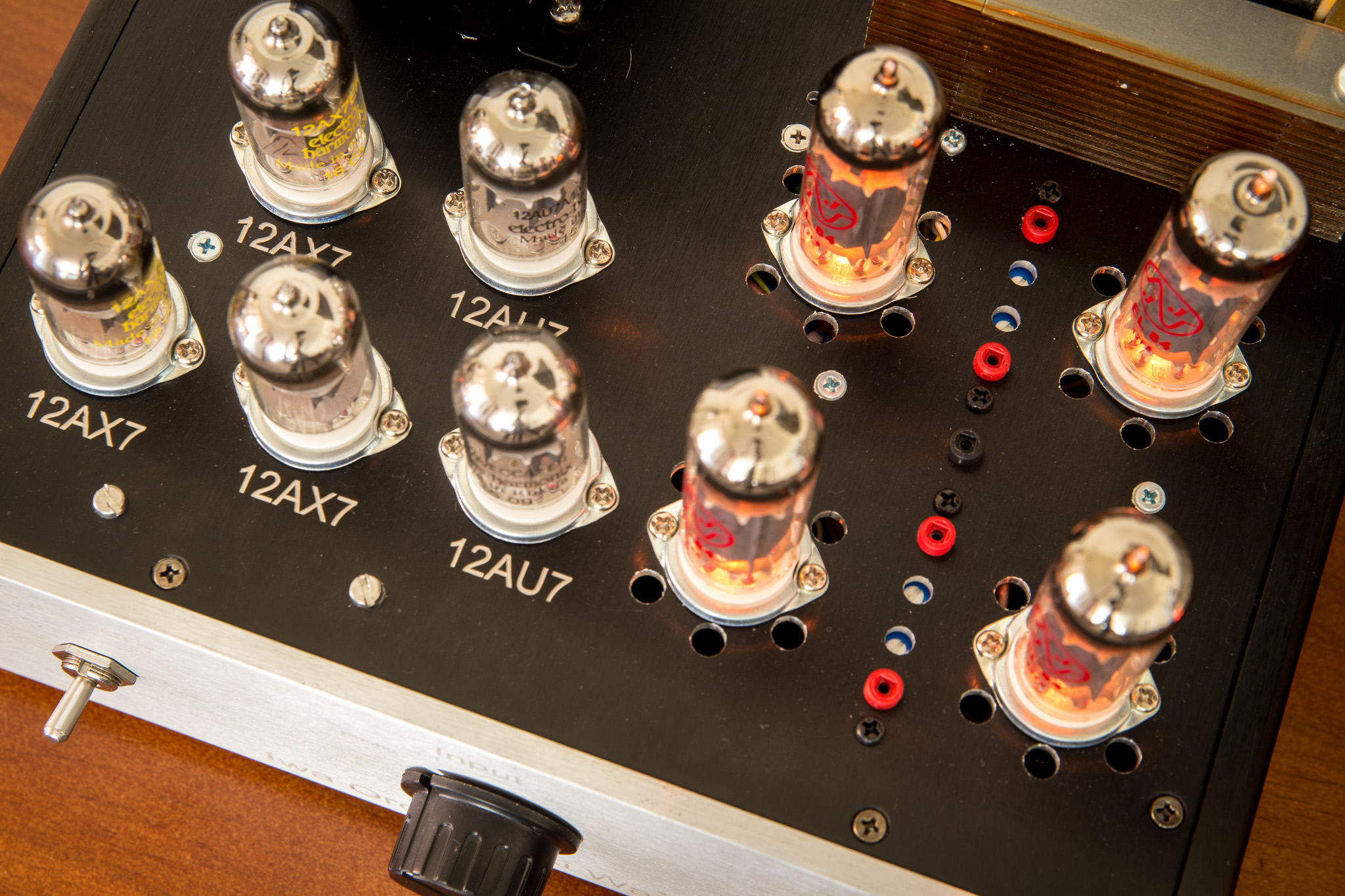 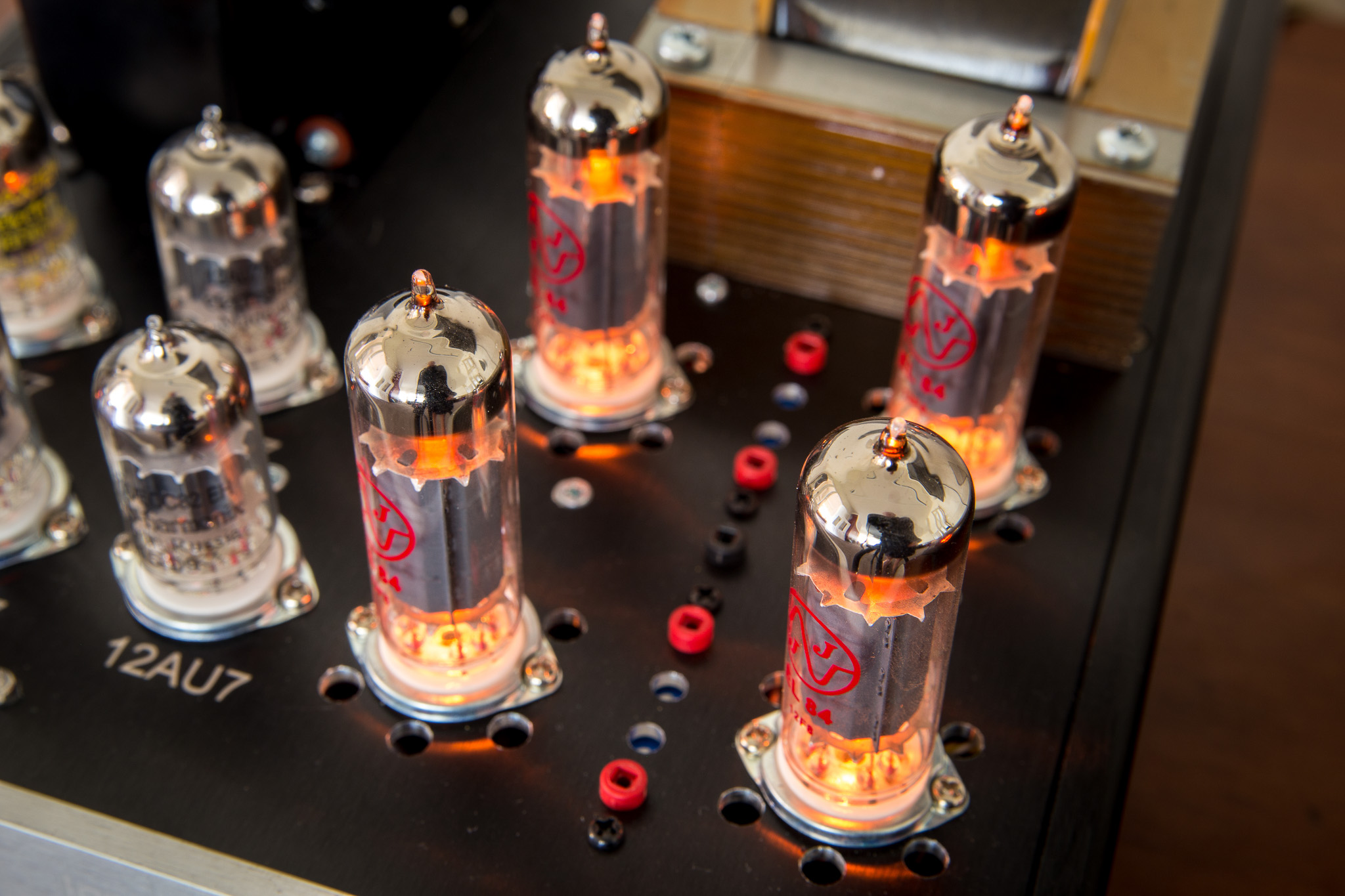 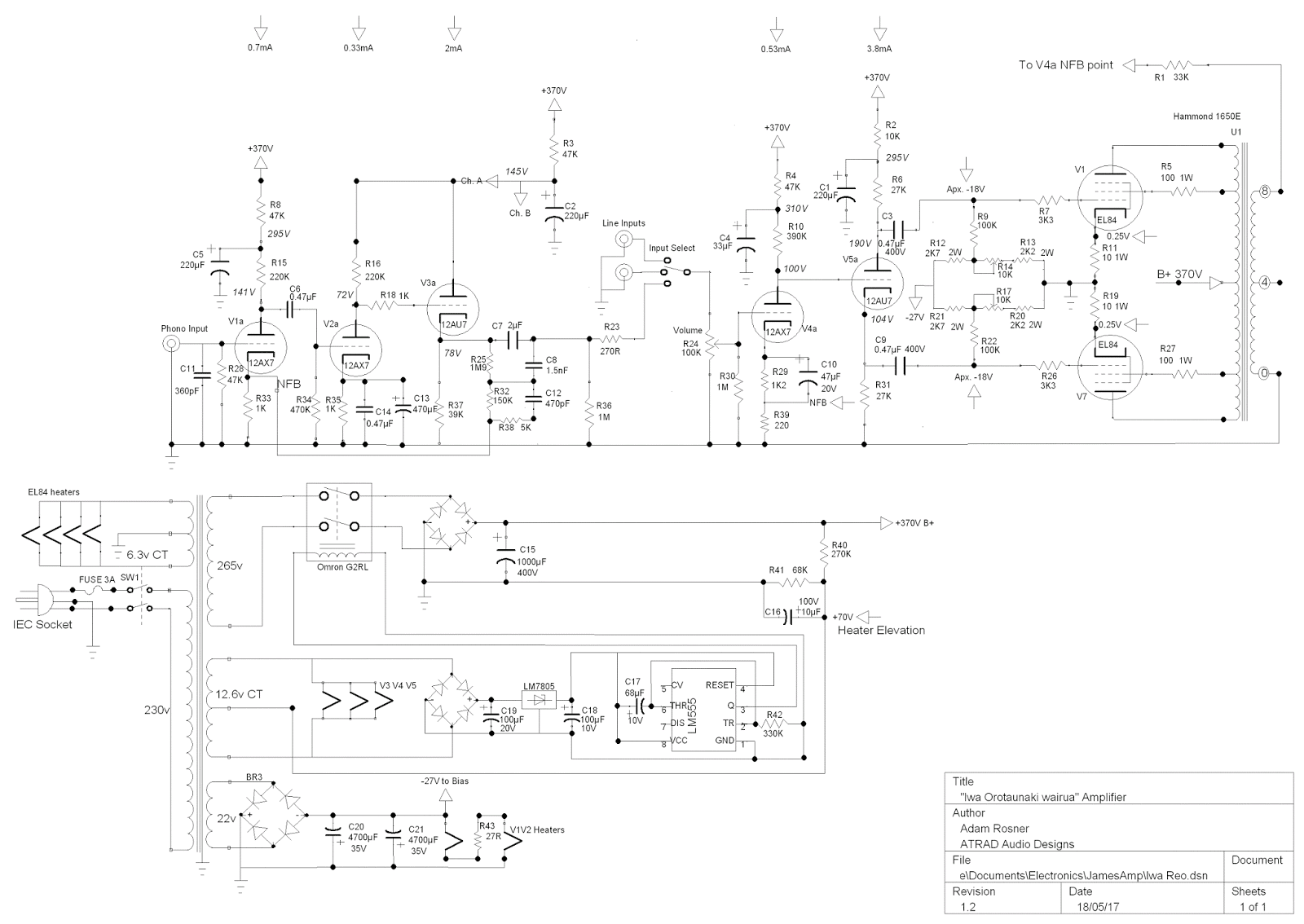